The Death of Injectables

Commoditization is here, an expert says. What does it mean for the future of practice?

The 1990s ushered in the most popular cosmetic facial treatments that the world has ever seen. Neurotoxin and filler treatments have taken off like a NASA rocket and have not slowed down. The early days were most interesting, as these treatments were ground breaking with evolving treatment guidelines and use of potentially dangerous substances. The teaching, use, and distribution of these injectables (at that time Botox and Restylane) was tightly controlled by the manufacturers and aimed at various specialties that were positioned to treat cosmetic patients.

This was a golden time for some specialties and hence the idea of the “core” was born. As a board certified oral and maxillofacial surgeon, my specialty was not mentioned in the “core” group, but due to my scope of cosmetic publications, teaching, and surgery, I was included in the advisory boards and select teaching groups for all the major companies. These were great and exciting times as pre-Sunshine laws allowed relatively lavish and fun gatherings at some awesome venues. It was not all fun by any means, but actually intense teaching, learning, and group participation to propagate these new products. Listening to such luminaries as Drs. Jean and Alastair Carruthers, Steve Fagien, and the late Arnie Klein was simply captivating. These meetings were ground zero for the select few to learn how to use the new poisons and clear injectable fillers. This was truly the golden period of teaching and learning about injectables. This also coincided with the advent of liposuction, lasers, endoscopic surgery, and other technologies that were served up to Baby Boomers entering their fifth decade. The perfect storm, one might say.

The golden period bloomed when the select few returned to their hometowns and began introducing these products. It was amazing, as these doctors had a quantum jump on their competition who were still pretty oblivious to their uses and, in many instances, could not purchase the products. This ushered in an era from around the mid 1990s to 2010 where there was almost a monopoly. It was a very profitable time, as there simply was not much competition.

As the grip of the “core” began to loosen, many other specialties became providers of neuromodulators and fillers. This was not taken well by the “core,” and I attended many meetings where the discussion centered on how to preserve the core, and companies were chided for selling or teaching to “non-core” physicians. How dare they! The calls were loud, “Patients will suffer from malpractice by untrained injectors…plus, the monopoly will fade.” I sat in break-out groups where prominent doctors debated how to prevent the “commoditization” of these products.

Many specialties entered the arena, including all types of physicians, dentists, and nurses. Med spas sprung up offering these products, frequently at reduced rates. The “core” flexed there glabellas with protest. Yes, busy injectors did see some complications, but by and large these other specialties became proficient at these treatments and some of the highest-volume injectors in the nation currently come from specialties very distant from the original “core.” I have seen many famous injectors on the podium who in reality did very little injecting and other docs who were huge injectors ignored by major companies for fear of alienating the powers that be.

Fast forward to now. The field is wide open. Gone are the days when only several docs on the block were competent and busy injectors. Many specialties, spas, and nurses have become very busy injectors. Also gone are the days where the select few could charge whatever they desired and had waiting lists of patients. Yes, there will always be injectors who are ultra-good at what they do and will always remain at the top, but even they have seen a dilution of their business from the heyday. Now many busy practices employ “nurse injectors” while they concentrate on other procedures.

So, commoditization did happen. This was not a shock, as this is what happens in a capitalist society. The same thing happened when the automobile was introduced. At first a few companies produced them and a small group (who could afford them) used them. Henry Ford changed all of that with the affordable Model T. Commoditization is simply a product of innovation, bad for some but great for the sum! If people want something and there is profit involved, someone will always sell their pork chops for a bit less than the place across the street. It is a fact of business and life. The recent congressional hearings and punitive actions for drug producers that charge exorbitant prices for life saving drugs is an example of what can happen for those who try to fight it.

I saw a recent ad for Botox at $9 per unit. A great price I thought. Then I scrolled down and saw that the med spa offering this was also open on Saturday and Sunday! How do you compete with that? I have heard that there are 24-hour providers in New York City. Rumor or not, I am sure there will be sooner or later.

I have a large facial surgery practice and am a top tier injector of toxins and fillers for the two main companies. These products, unlike my surgery, are commodities that have up to a 50 percent overhead related to the fee. It can be expensive to use these products, and the companies aren't lowering the price any time soon. So, with the dispersion of competitive providers offering lower rates (and admit it, most are pretty good at what they do) our profit margins will be affected.

I personally think we are in the early stages of commoditization and should expect many more medical, dental, spa and nurse providers every year. LASIK surgery underwent the same thing until many providers stopped offering the procedure as the profit margin became so low due to the competition. Even wealthy people will drive a little farther for cheaper gas! Orthodontists are experiencing a similar struggle with Invisalign. This is sort of an extreme example of commoditization as it removes the doctor altogether. Commoditization is bad for the original few but great for the companies; they will sell more products. As long as their products are being used correctly and safely, it is to their benefit. 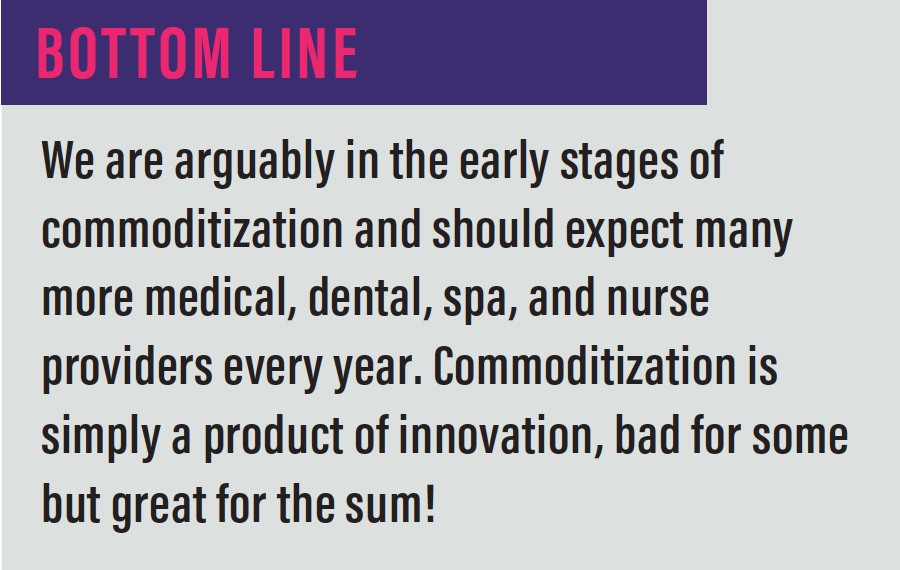 I think someday us grey haired (or bald in my case) docs will stand at the podium and talk about the excitement, exclusivity, and profit of the old days of injectables. Yep, there remain exclusive practices that still charge $16 for a unit and $1,000 for a syringe, but if no one else is listening, even they will tell you that they feel the difference.

The good news is that there is really no bad news, simply the natural progression of technology and business. Those leaders who ushered in the new injectables will remain on the cutting edge poised to inaugurate the next best thing in the pipeline. Leaders will always be the first to use new products and technologies, to hone their applications and safety and to pass these advances on to the masses. Sometimes it's hard to let go, but that is part of being a leader!

Fundamentals of Growing Your Services and Practice With Women 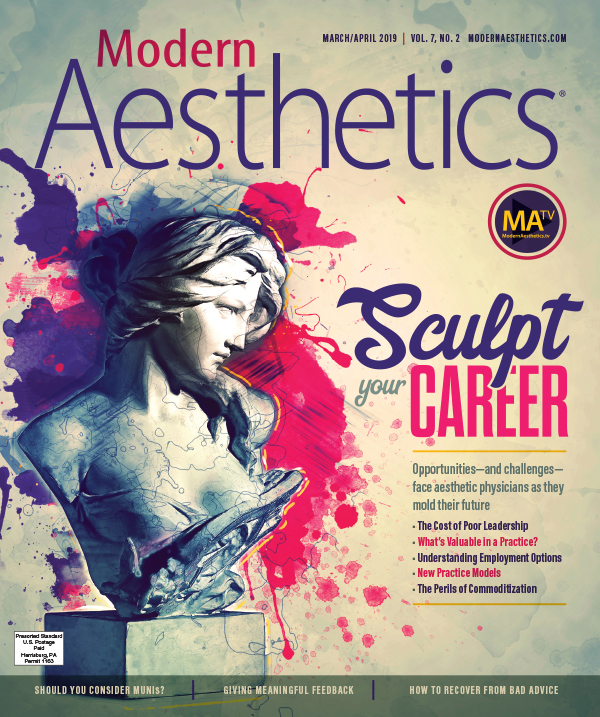