Addressing Photodamage with Dual Methodologies: The Synergistic Effects of a Pulsed Dye Laser and Picosecond-domain Laser

Since ablative laser resurfacing became popular more than 20 years ago, aesthetic physicians have been seeking new and better ways to improve the appearance of the skin with little to no downtime. The pulsed dye laser (PDL) targets the extra vasculature that results from photodamage and is one of the five key signs of skin aging: fine lines and wrinkles, enlarged pores, sagging skin, redness, and pigmentation. In doing so, the PDL not only permanently reduces redness, but also induces inflammation that remodels the dermis, leading to improvement of many of the other signs of skin aging. The picosecond-domain laser rejuvenates skin by a completely different mechanism, creating thousands of tiny treatment zones more superficially, and also resulting in dermal and epidermal remodeling. The net result is a synergistic approach to rejuvenation of photodamaged skin.

Of the devices in my practice, the one I have used most consistently is the Vbeam laser. I find that, beyond its well-recognized use for rosacea, port-wine stains, and erythematous scars, this laser is beneficial in removing skin redness associated with photoaging.

The newest version of this device, the Vbeam Prima laser, represents an entire redesign of the laser head, which allows higher fluences using larger spot sizes, and far greater reliability than the previous-generation Vbeam. The new Vbeam Prima, which functions on the principle of selective photothermolysis, offers dual wavelengths—595nm and 1064nm—and cooling via the patented Dynamic Cooling Device (DCD) and the new EverCool contact cooling sapphire tip. The redesigned device allows for more treatment capabilities and additional comfort.

Patient satisfaction with the Vbeam Prima system treatment is high. The number of treatments required for a given patient is a function of who and what is being treated and is therefore variable. Most patients tolerate treatment well. I advise patients that the sensation of the laser on the skin may feel like a snapping or pricking sensation.

I have used the Vbeam laser for more than 12 years, and it is a workhorse. Much newer to my practice is the PicoWay picosecond-domain laser. FDA-cleared for several conditions, including benign pigmented lesions and tattoo removal, it is also used for acne scars and wrinkles using the PicoWay Resolve handpiece. PicoWay treatments are typically quick, and there is minimal downtime following treatment.

Unlike ablative lasers that remove surface skin, the PicoWay Resolve handpiece does not ablate the surface layer of the epidermis. The tiny microbeams create small treatment zones beneath the skin surface. Beam-splitter technology is used to create small treatment zones with each pulse, without damage to surrounding tissue. As a result, the PicoWay Resolve handpiece can be used to treat acne scars and wrinkles across a wide range of skin types with low to no downtime, unlike many other lasers. Because the effects of treatment are less dependent on thermal injury, there is a reduced risk for scarring and other adverse effects that may be seen when using heat-inducing devices in darker skin tones.

The PicoWay system has become my go-to device for treatment of photodamage or acne scars in darker skin types. 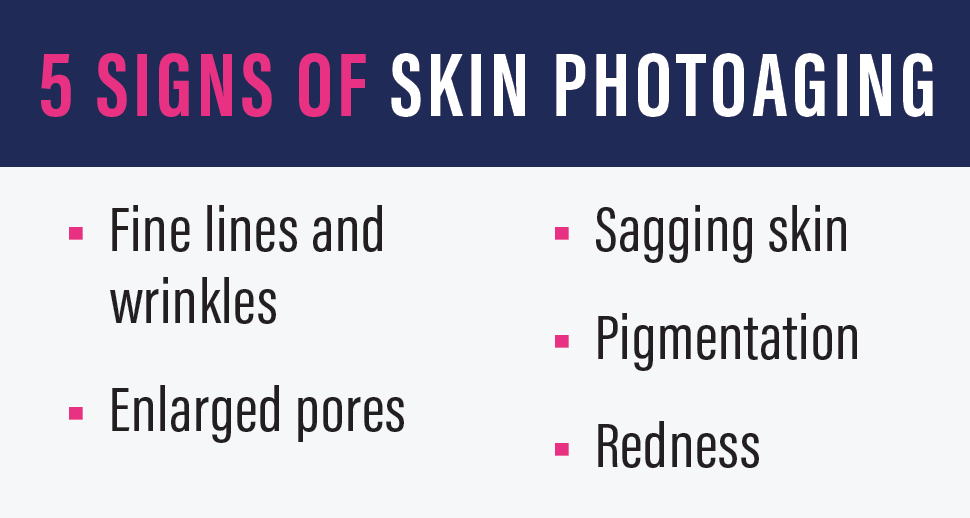 The Vbeam and the PicoWay lasers work well as complementary devices for treating the five signs of photodamage. Although the Vbeam Prima laser targets redness, it simultaneously induces an urticarial reaction that leads to skin remodeling. So not only does the Vbeam Prima laser address facial redness, but also other signs of skin photoaging.

The PicoWay system creates tiny treatment zones that also induce inflammation and stimulate remodeling through entirely different mechanisms. The result of such combinations can often be synergistic, where 2+2=6. 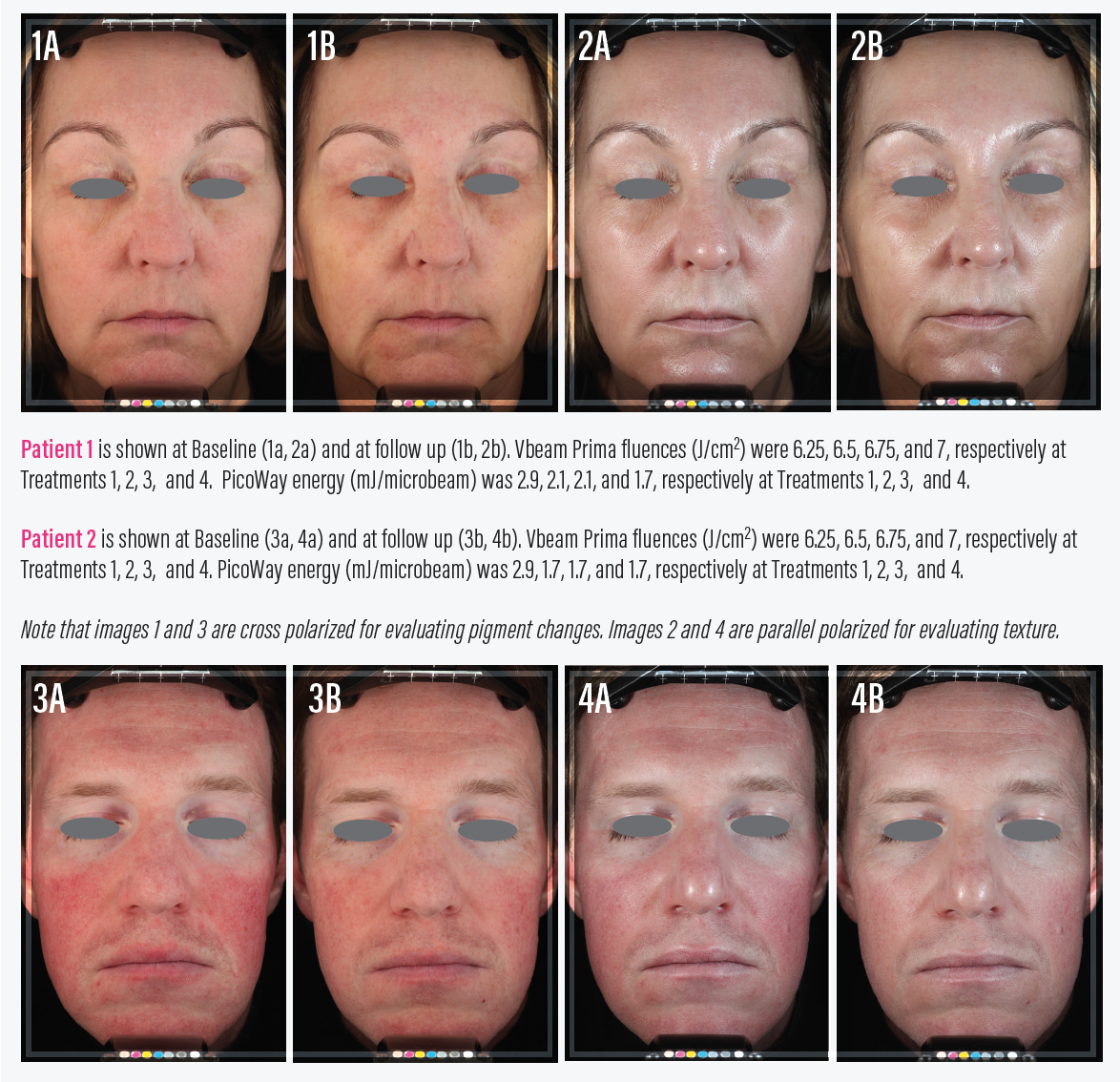 Both the PicoWay and Vbeam Prima lasers have been shown to improve the signs of photodamage and are easily used with minimal downtime. The ability to achieve these synergistic results with minimal patient discomfort is a welcome development for the aesthetics space.

While there is much talk in the popular press about fighting wrinkles and using “anti-aging” remedies, patients who present to aesthetic practices for rejuvenation procedures don't always speak to us about furrows and sagging skin. Some patients point to specific wrinkles or dark spots, but many speak in more general terms. In fact, many patients initiate a consult by indicating that they want to look more “refreshed” and more “rested.” They don't necessarily want to look decades younger, but they want to look like a better version of themselves. 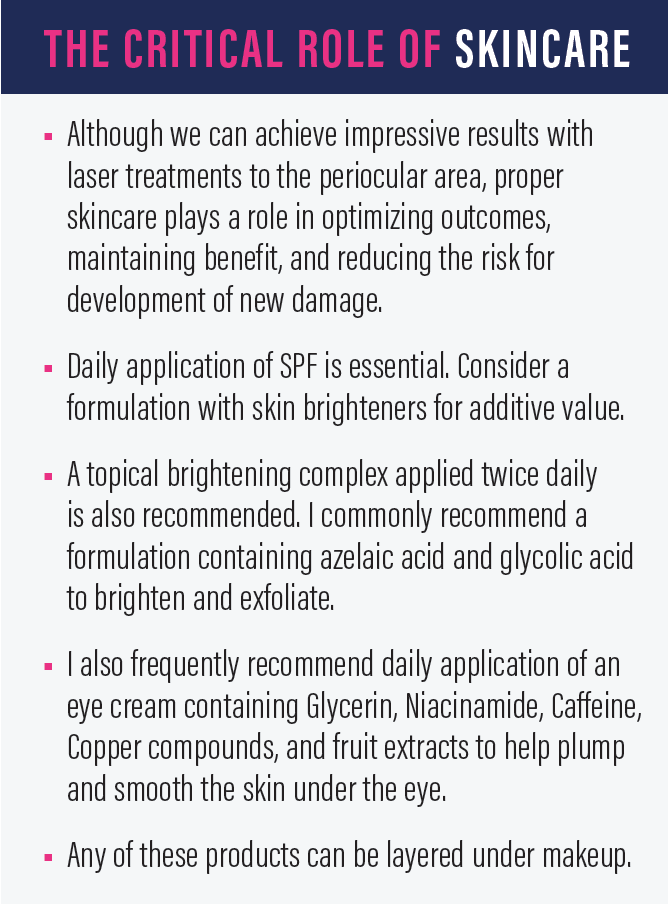 In reality, one of the most common areas of concern among patients involves the under-eye area, where patients complain that discoloration and darkening give them a “tired and aged” appearance. Many patients have tried creams and solutions intended to improve the appearance of tear trough hyperpigmentation with limited success.

Several types of energy-based devices have been used to treat under-eye discoloration, with mixed results. Some devices improve discoloration without notable effect on texture and tone, while others seem to target texture and tone without improving discoloration. Interventions like the eMatrix bipolar radiofrequency device or the CO2RE CO2 device can be quite effective for improving infraorbital pigmentation, but are associated with five to seven days or more of downtime, respectively. It should also be noted that using aggressive settings for fractional lasers poses the risk for inducing hypo- or hyperpigmentation.

Advancements in picosecond technology have provided a new, effective option to treat hyperpigmentation (e.g., benign pigmented lesions). PicoWay is a three true-picosecond wavelength system. Two of these wavelengths are FDA cleared to treat benign pigmented lesions, with the dual 532nm and 1064nm Zoom handpiece. The PicoWay system targets both superficial and deep pigmentation with shorter pulse durations and lower fluences than Q-switched lasers. Additionally, the picosecond Nd:YAG laser can help to stimulate collagen and elastin for a visible improvement in skin texture and tone.

In my practice, I have used PicoWay successfully to treat infraorbital hyperpigmentation, which requires some important eye safety considerations. Most of my patients undergoing this procedure have multiple treatment sessions, usually about five in total, provided at monthly intervals. The skin is cleansed prior to treatment, and numbing cream is applied. Some mild redness and swelling may occur after treatment and can last for two to three days.

In addition to the pigmentary changes these patients have, the appearance of dark circles under their eyes can also be attributed to vasculature in the periorbital area. As the support structures around the vessels become depleted and the skin “thins,” the vessels become more apparent. As a complementary treatment with the picosecond laser, treatment with the Vbeam pulsed dye laser (PDL) is helpful to diminish this vascular component and improve the appearance of the area. Vbeam treatment to the under-eye area has virtually no-downtime. Patients may develop mild erythema and petechiae, but they can apply make-up immediately post-treatment to conceal these. With PicoWay treatment, the downtime is also low, and make-up can be applied approximately 24 hours following treatment. 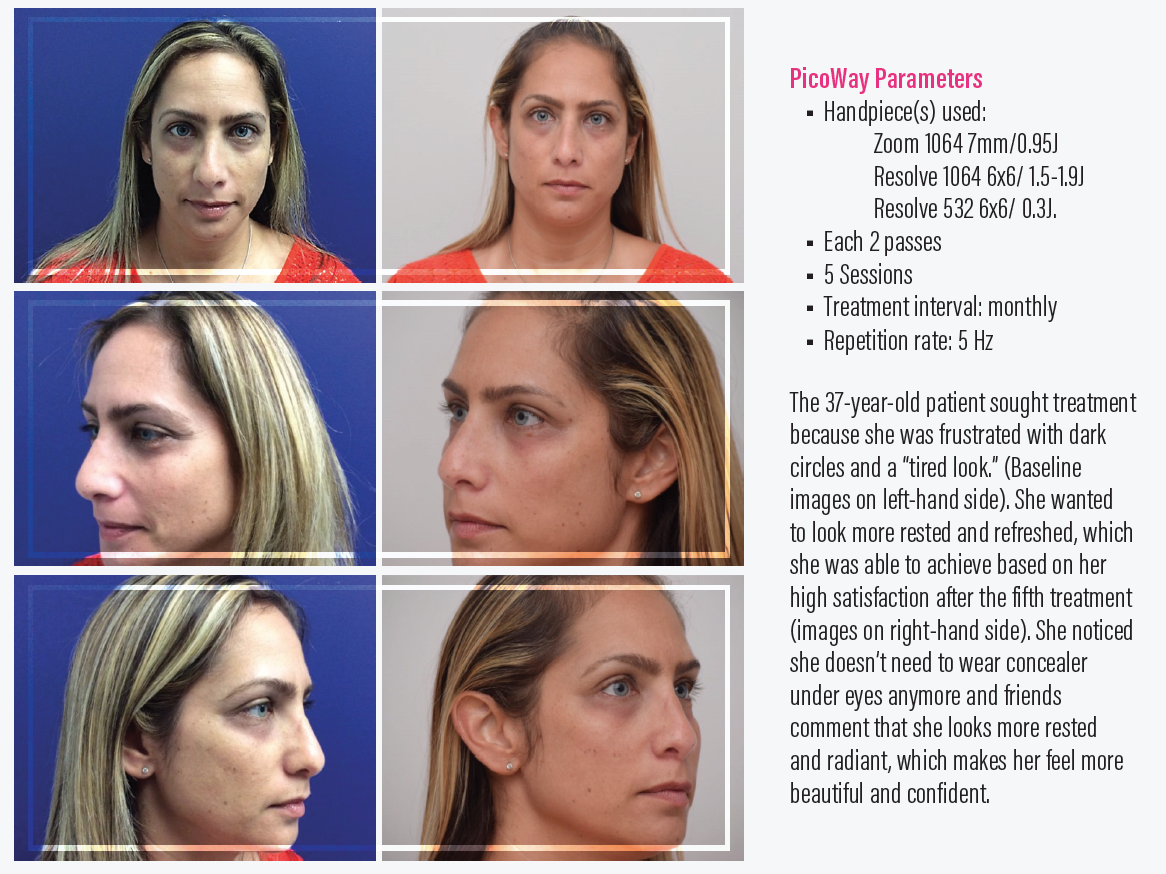 Any treatment to the eye area requires precautions to protect the patient's vision. Appropriate intraocular shields must be placed on the patient and the operator should be knowledgeable of technique that minimizes the risk for ocular injury. That said, when treatment is provided by a properly trained physician following safety protocols and utilizing appropriate treatment parameters, both the PicoWay device and Vbeam Prima laser can be used for this application.

Treatment of the periocular area using the PicoWay and Vbeam lasers can be very satisfying for the physician. Patients see notable improvement by about the third treatment with continuing response with additional treatments. Patients report high levels of satisfaction, noting that they look “more rested.”

Acne scarring is a significant patient concern. An estimated 40 percent of acne patients develop some degree of scarring, which can range from mild to severe. Although many individuals are bothered by the appearance of acne scarring,1 only a relatively small proportion of them pursue treatment, owing in large part to an historical lack of efficient interventions. To date, treatments have offered inconsistent results, and optimal improvement has depended on use of multimodal approaches and repeat treatments (See sidebar). 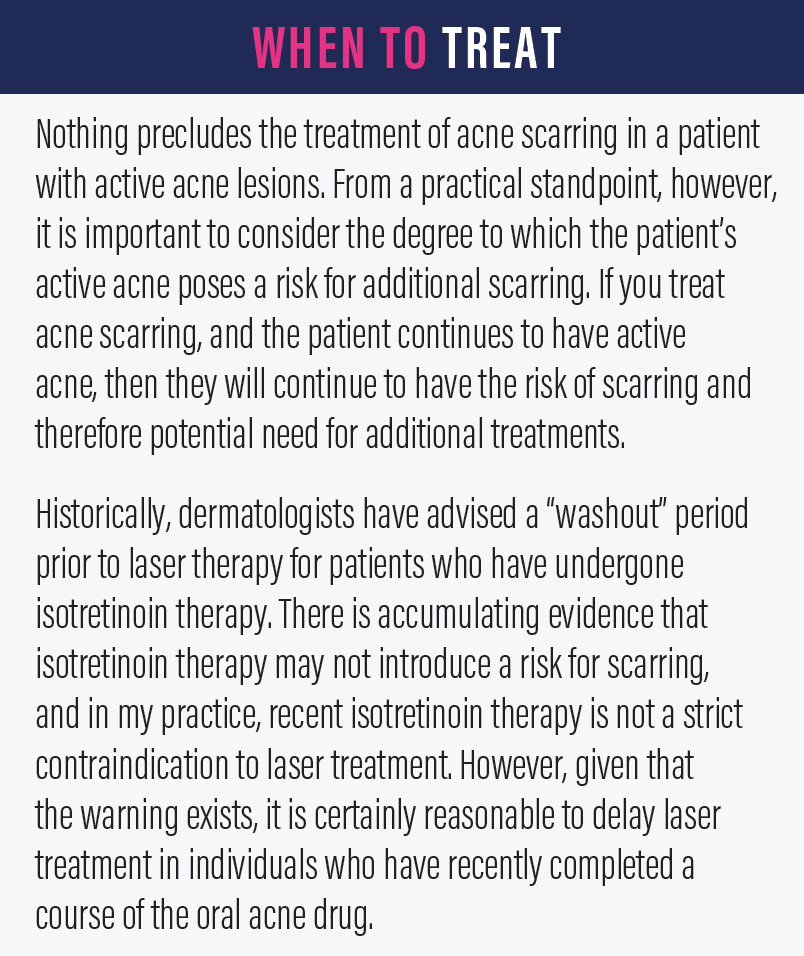 In100-90 percent of acne scarring cases, scarring is atrophic and associated with a lack of collagen.2 Acne scarring develops when the collagen beneath the skin becomes deranged in response to inflammation from acne. This damage to the collagen layer results in the sunken (or sometimes raised) appearance of the acne scar, which becomes the target for treatment. Many of the modalities employed in efforts to address acne scarring aim to resurface or smooth the skin or stimulate new collagen growth.

The advent of the picosecond laser era brings a novel approach to acne scar treatment, reducing the downtime associated with some earlier treatment options. Like other energy-based devices used to address acne scarring, the picosecond laser (532nm/1064nm) creates tiny vacuoles under the epidermis where new collagen can form to reduce the acne scarring. This sub-surface ablation, leaves the stratum corneum intact, while targeting the area where collagen is formed.

The PicoWay Resolve handpieces on the PicoWay system are FDA cleared to treat both acne scarring and wrinkles. It uses a split-beam approach with a photoacoustic effect that doesn't overheat the skin, minimizing the downtime.

In clinical studies of the PicoWay Resolve handpiece:

Traditional fractional photothermolysis essentially delivers energies into the skin that either coagulate or ablate the skin from the epidermis down into the mid-papillary dermis. Although the surrounding skin is spared because of fractionation, significant injury in that column of energy exposure still occurs.

The split-beam picosecond laser mechanism is different in that it induces what is called laser-induced optical breakdown (LIOB) at a very focal point within the epidermis and papillary dermis, such that all the surrounding skin in three-dimensions is spared. This translates clinically to a similar neocollagenesis effect, but with reduced downtime, even compared to traditional non-ablative fractional photothermolysis.

PicoWay Resolve laser patients typically receive a series of three to six brief 15-20 minute treatments, provided at least one month apart. The dual wavelength 1064nm/532nm PicoWay laser can target both superficial and deep depths with a single device. The PicoWay Resolve is FDA cleared for acne scars (1064nm) and wrinkles (1064nm and 532nm) treatments. Typically, a couple passes of the laser are done.

Even at the most aggressive laser settings with the PicoWay system, downtime is less than a comparable treatment setting with a traditional non-ablative fractional photothermolysis device.

Redness and swelling can occur after PicoWay system treatment and can last for a day or two, perhaps longer with more aggressive settings. Typical treatment responses include erythema and edema. Additionally, petechiae and acneiform eruptions can occur. Most subjects report mild levels of pain with no or mild discomfort following the treatment. There is little to no downtime and patients can typically wear makeup the next day. 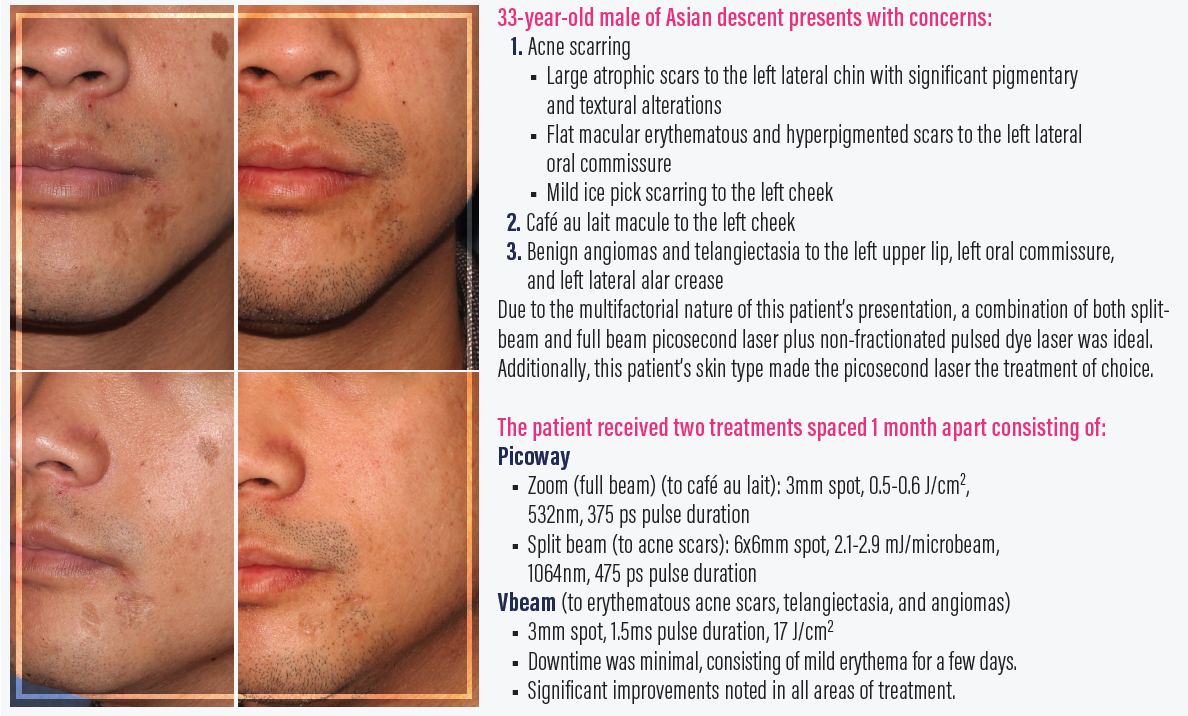 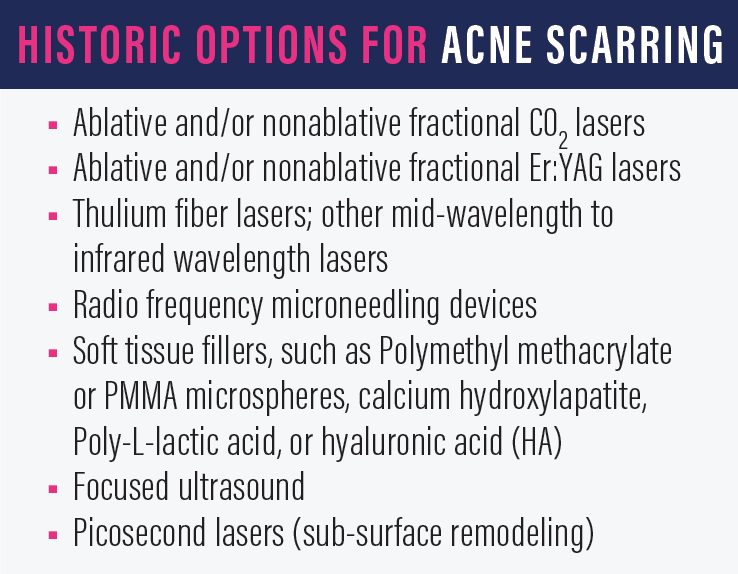 In addition to their depressed appearance, acne scars frequently are erythematous due to neovascularization of the scar secondary to inflammatory injury. The Vbeam laser addresses this component of the scar by targeting and minimizing vascularized areas, reducing overall redness. Nearly all patients I treat for acne scars receive PicoWay laser treatment as well as Vbeam laser treatment.

A benefit of laser treatment is that is does not preclude subsequent treatments using alternative modalities. A patient could still receive filler injection into discreet scars if s/he desired. 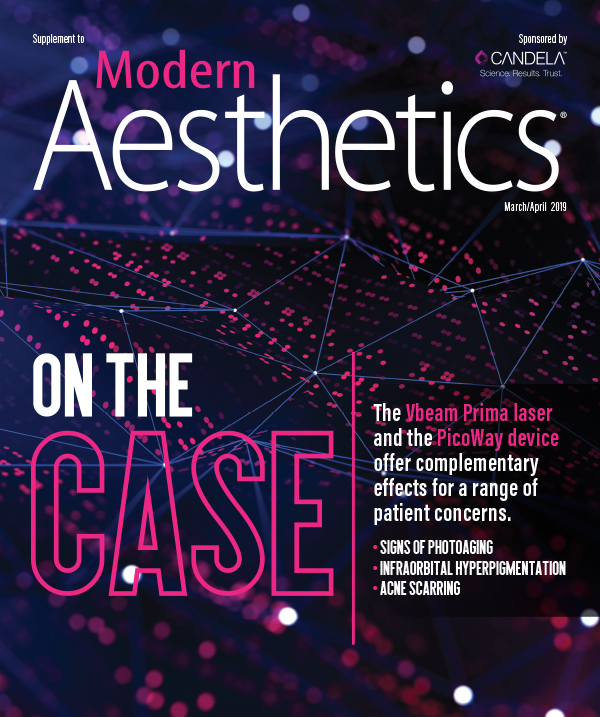