The scientific study of botulinum toxin dates back to the 1800s, but it was not until the second half of the last century that human testing of therapeutic neuromodulators began and FDA-approved formulations came to market. Jürgen Frevert, PhD, led Botulinum Toxin Research at Merz Pharmaceuticals GmbH in Potsdam, Germany, starting in 2003. Dr. Frevert began studying botulinum toxins in 1983 and over the next 20 years worked for well-known manufacturers of therapeutic and aesthetic botulinum toxins. Among his research accomplishments, he purified and characterized all botulinum toxin serotypes (type A–type G) and developed assays and vaccines. During his early foray into the world of botulinum toxins, Dr. Frevert made an observation that puzzled him.

Dr. Frevert also wondered if the proteins could have unintended effects. “Based on my experience in the development of vaccines, I suspected that these proteins may have an effect on the immune system,” he says. “Therefore, I suggested developing a product free from these unnecessary proteins.”

The neuromodulator itself does not bind to these cells, is not able to activate, and is therefore considered a weak antigen. However, the unnecessary proteins may contribute to the danger signal and act as an adjuvant, Dr. Frevert explains. “The activated cells then take up foreign material, including the neuromodulator, which results after further steps in the formation of antibodies against the neuromodulator. The unnecessary proteins are not necessary for the therapeutic effect, but they may play a part in the activation of the immune system.”

One publication that analyzed titer levels in 560 patients found that 14 percent of patients who received a neuromodulator that contained unnecessary proteins developed secondary non-response or diminished response with continued exposure.3

Ultimately, patients who develop immunogenicity to neurotoxins could require “a vacation” from therapy so titer levels can reduce to a point that they are able to have therapeutic response again.

With all of this in mind, Dr. Frevert set out to formulate a botulinum neuromodulator formulation with no unnecessary proteins. The result is incobotulinumtoxinA, now marketed by Merz Aesthetics in the US as Xeomin. Dr. Frevert’s hunch appears to have been proven right. None of the more than 1,400 patients became secondary non-responders in all of Xeomin’s clinical studies across all indications. “No other botulinum toxin on the market can say that,” Dr. Frevert says. Plus, “Xeomin can be stored at room temperature, in contrast to other products, which must be kept refrigerated.”

Dr. Frevert came to the conclusion that if these additional proteins are unnecessary, have no impact on efficacy, do not stabilize the neuromodulator, and have no role in mechanism of action, then they should be eliminated from the product. “My goal was to develop a neuromodulator product that is optimal for the patient,” Dr. Frevert says.

“The patient should be treated only with the active ingredient that is needed to carry out the therapeutic effect, which would mean the pure neuromodulator without any contamination by other proteins. As patients are making informed decisions about what they put in their bodies, they should know they have options and ask their providers about the purity of the product prescribed.”

Why did you start offering Xeomin? Why do you select it over other options?

I’ve used Xeomin since it came to market. I trusted the reputation Merz has for quality products, and I wanted to try a neuromodulator that was an alternative to what was then available.

What benefits does Xeomin offer to your practice? For patients?

For my patients in their twenties and thirties receiving a preventative neuromodulator, I feel like it’s my duty as a doctor to start with Xeomin, because the longer you use a neuromodulator, evidence suggests, there is a greater chance of developing resistance.1 I think it’s important, especially for those younger millennials, to start off with Xeomin; when they’re 60 years old, it may be more likely that I can still treat them with a neuromodulator versus them being resistant at that point. Plus, we also have to keep in mind that these younger patients could one day develop medical conditions that require therapeutic neuromodulator treatment, and we don’t want to increase the risk of developing resistance from cosmetic use.

Because of the competitive pricing of Xeomin, I can pass savings onto my patients, and many of them then spend money in my practice on other things.

You mentioned the purity of Xeomin. Is that something that resonates with patients?

Once they understand the options, many patients find the notion of a uniquely purified product appealing.

Although individual results vary, my patients have been extremely happy with Xeomin results, whether they like a frozen look or whether they like a natural appearance. They like that it’s a uniquely purified product without unnecessary proteins. They like that the price is a little bit of a price break for them, because then they can come back to have their fillers or their lasers that they want in addition to just having the neuromodulator. And on top of that it’s just a great product. Patients are really happy. That’s why I inject myself with Xeomin. That’s why I inject my family members with Xeomin.

1. Bakheit AM, Liptrot A, Newton R, Pickett AM. The effect of total cumulative dose, number of treatment cycles, interval between injections, and length of treatment on the frequency of occurrence of antibodies to botulinum toxin type A in the treatment of muscle spasticity. Int J Rehabil Res. 2012 Mar;35(1):36-9. 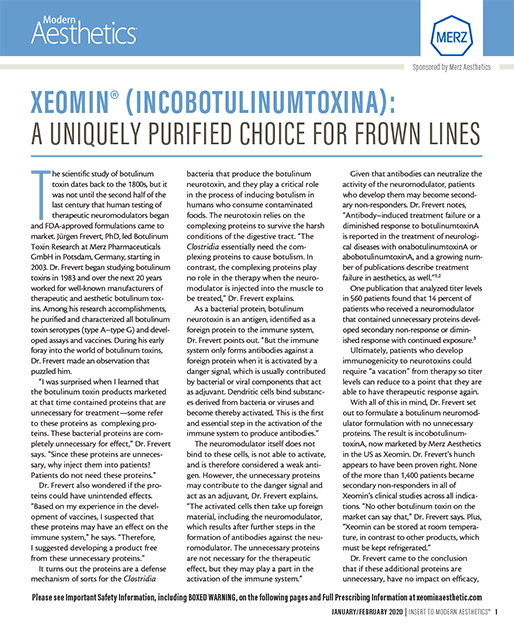