The consequences of regulatory investigations can be severe. Here's why medical spas are commonly investigated—and how to avoid violations.

Medical spas typically don't think they are going to be investigated by the regulatory agencies in their state, and historically, this is often the case. Agencies simply don't have the money or the manpower to keep an eye on all the aesthetic practices under their jurisdiction. However, the medical aesthetics industry has grown exponentially in recent years, so the amount of scrutiny it receives from these agencies is increasing, as are the odds that your medical spa is going to be investigated.

The consequences of regulatory investigations can be severe. Depending on what the agency finds, this could result in the suspension of the practice's physician's license, without which a medical spa typically cannot operate, not to mention heavy fines. Some of the most severe infractions can even result in criminal prosecution. Knowing why these inquiries are typically initiated will help you avoid them, so here are the top five reasons why medical spas are investigated.

Most of the procedures performed at medical spas are considered by regulatory agencies to be medical in nature. Before these treatments are administered, a physician generally must first conduct a face-to-face examination, wherein he or she determines the extent of the patient's issue and suggests a course of treatment. However, many medical aesthetics practices have been disciplined by regulatory agencies because they do not properly administer these exams. In fact, this is the primary reason why these investigations are initiated.

Confusion over the status of minimally invasive treatments, such as injections of neurotoxins and fillers, tends to cause these issues. Many seasoned nurses have gotten in trouble for administering these treatments without an exam because they think an exam is not required, due to their extensive background and experience.

Medical spa employees must understand that doctors are thoroughly in charge of medical treatments at their practices—only they can set the protocols, only they can set the treatment plan, and they can prescribe and delegate others to perform that treatment plan. In most states, the initial exam can be delegated to certain licensed practitioners, such as a nurse practitioner or a physician assistant, but the physician still must be involved with establishing this protocol and making sure it is followed at all times.

Regulatory agents tend to spend much of their time searching the internet for potential violations rather than conducting investigations in the field, thanks to the lack of funding their agencies receive. If they search for terms such as “medical aesthetician” (which is not a real thing) or indications on websites that the practice is in contravention of state law, particularly as it regards ownership structure, it's not terribly difficult for them to find violations. In most states, only a physician or physician-owned corporation can own a medical practice; if a practice's website indicates that, say, an aesthetician or nurse owns the practice, opening an investigation against it is an easy call for regulators.

Medical spa owners and operators also should not promote testimonials that are hyperbolic or suggest offerings beyond the scope of what the practice can actually provide. Medical advertising regulations are extremely strict, so practices must only cite skills and accomplishments that can be proven. For example, if your practice advertises “the best Botox in Boston,” it may hear from regulators, since that fact can't be proven.

Regulators also look for indications that a practice has violated patient privacy laws on social media. Anything that can identify someone as your patient—down to a simple “thank you for coming in” response to a Facebook post—can be interpreted as a violation of HIPAA, provided you have not obtained the patient's consent in advance. If you think your social media activity may be violating patient privacy laws, consult with an experienced health care attorney as soon as possible. (Author's note: The American Med Spa Association (AmSpa) works with a national law firm that focuses on medical aesthetic legalities, and as a member, you receive a discount off of your initial consultation, along with a number of other benefits. To learn more, log on to www.americanmedspa.org.)

If a practice is found to have purchased pharmaceuticals from overseas sources that claim to be cleared by the FDA but are not, regulators are likely to initiate an investigation. Only drugs and equipment that can be purchased legally in the United States have been cleared in total; importantly, this means that, in addition to the actual product, the FDA has approved all packaging and inserts.

There are two aspects of this issue. On one hand, counterfeit drugs—typically neurotoxins and fillers—that are manufactured in and purchased from China are potentially dangerous to clients and should be avoided at all costs. The distribution of these products has declined in recent years, as more owners and operators have learned about their nature, but they're still out there.

On the other hand, “parallel importation” is a practice in which legitimate products sold in countries where price controls keep the cost of prescription pharmaceuticals low are resold to practices in the US for far less than they would otherwise pay. It exists in something of a grey area legally, but it is understood to be illegal with pharmaceutical companies. The FDA has indicated a willingness to prosecute such practices, so if your medical spa has been found to engage in it, it very well might trigger an investigation.

Medical spas are medical practices, so a medical professional must always be onsite. As mentioned previously, many of the procedures administered at medical spas are considered to be medical in nature, and while a physician can delegate most of these treatments to others, including non-licensed individuals, a licensed professional—a physician, nurse practitioner, physician assistant, or RN— should be at the practice at all times to oversee the administration of these procedures. The type of treatment being provided, as well as the practitioner performing the treatment, are important considerations, so check with your local health care attorney for more information.

Some treatments, such as microneedling and dermaplaning, traditionally have not been recognized as medical treatments, but now typically are, complicating matters at practices where the estheticians have been performing these procedures for years. In addition, most states require microblading to be administered by a professional with a tattooing or permanent makeup license, which complicates matters further, although these licenses aren't typically difficult to obtain.

At some medical spas, physicians serve as medical directors in name only, and they don't pay much attention to what is going on at their medical spas. Some physicians oversee more than a dozen medical spas, which should give you some idea of how much time they spend actually working at these practices. Therefore, these practices probably do not have proper oversight, unless they have a large number of nurse practitioners or physician assistants on their payroll. Regulators can see that a physician appears to be stretched too thin and use that as a reason to see what's going on at his or her medical spas.

5. Failure to File with the State Board of Cosmetology

Medical spas have to respect the regulations involving the administration of medical treatments, but they also must follow the rules related to their purely aesthetic offerings. Most state boards of cosmetology require businesses that provide these services to apply for a cosmetology “establishment license” (this may be called different things by different states, but essentially it is a registration with the board of cosmetology declaring that aesthetician services such as facials are being performed). Medical spas often neglect to obtain this license, since they tend to be much more concerned with maintaining medical compliance.

Boards of cosmetology are less fearsome adversaries than medical boards, but they have been known to cause significant problems for medical spas that ignore them. If your practice is offering aesthetic services, make sure that it is fully in compliance with the state board of cosmetology.

It's unlikely that a medical spa is going to get randomly investigated. Ninety-nine times out of 100, investigations are triggered by a medical spa being reported to the regulatory body, and this is more likely to happen as practices become more successful. A successful medical spa might be targeted by a competitor, sometimes for good reasons and sometimes out of professional jealousy.

Also, patients who feel they've been mistreated—whether they have or not—are likely to report a practice to a regulatory agency. A patient is unlikely to complain if they have a good experience, regardless of the outcome; a medical spa should always strive to provide patients with exceptional service so that they don't do something rash—after all, medical spa patients are a passionate bunch.

Finally, former employees often report medical spas to regulators if their departure was not amicable. A medical spa should be sure to set realistic expectations, provide proper job descriptions, and make sure employees understand procedures, so that if an employee is terminated, it shouldn't come as a surprise or be viewed as unfair in any way.

In it to Spin It: Cultivate Media Relations to Grow Your Profile 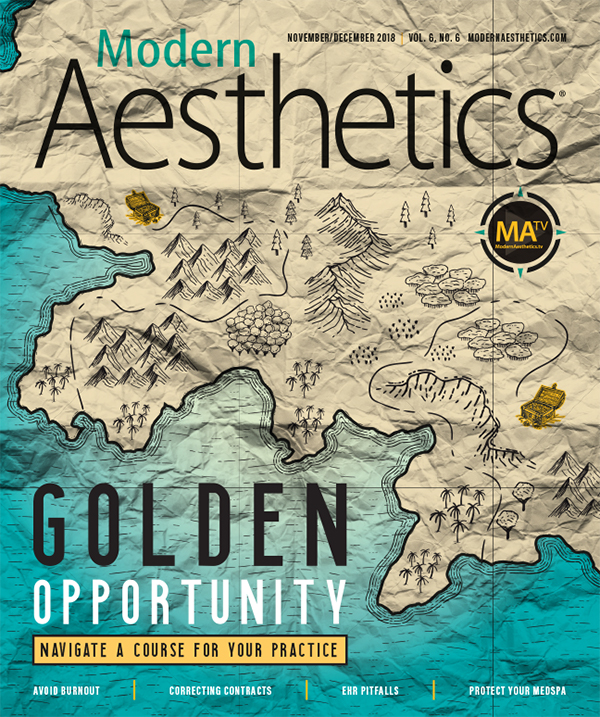