The Rise of Non-Core Doctors, and What It Means

Why are non-core doctors on the verge of taking over the medical aesthetic business from core doctors?

As it stands right now, approximately 60 percent of all medical directors at medical spas are non-core. Of the more than 300 people who the American Med Spa Association (AmSpa) has educated at its Medical Spa and Aesthetic Boot Camps, 60 percent had not yet opened their practice or had just opened in the past 30 to 60 days, and of those, 90 percent were non-core doctors or entrepreneurs. An incredible influx of non-core doctors is coming into the marketplace, and their ranks will only expand as the popularity of medical spas increases and the public becomes more aware of these businesses.

So why are non-core doctors on the verge of taking over the medical aesthetic business from core doctors? There are numerous reasons.

If you consider the intricacies of the medical aesthetic industry, it's hard to believe that core doctors are lagging behind. As physicians, they are allowed to own medical spas and, ideally, they would not only profit from the medical spas themselves, but also use the medical spas to funnel business to their medical and surgical practices. After all, medical spas tend to treat many of the same issues that these core doctors do, albeit non-invasively, and it does make sense that if a patient goes to a medical spa looking for a botulinum toxin injection, he or she might eventually be in the market for a nose job or a face-lift. In that case, core doctors who own medical spas should be in a good position to offer their services.

However, despite the apparent synergy between these two types of businesses, many of the core doctors who own medical spas and treat them primarily as extensions of their surgical practices end up very disappointed in the actual results. I chat with core doctors all the time, and those who have opened medical spas with the idea of using them as feeders for their practices tend to view them as poor investments, because they don't actually drive a substantial amount of business to the surgical or dermatology practices.

In truth, medical spas that are designed to act as feeders for surgical and dermatology practices are set up to fail, and most core doctors tend to fail as medical spa owners. They typically don't understand the medical spa business—how much work it takes, the profit margins, the necessary volume, and numerous other factors vital to operating a successful medical spa. The business model with which core doctors tend to be familiar is very different from the business model under which medical spas operate. Surgical practices offer expensive procedures, such as breast augmentations and face-lifts; therefore, they do not need to deal with as large a volume of patients and do not need to do as much marketing or patient acquisition. By the nature of their business, simply put, they tend to make more money per procedure and therefore don't have to put as much focus on sales training, patient retention processes, and patient acquisition strategies as med spa owners do.

Medical spas operate in a much different way than surgical practices. Granted, they must follow the same rules and regulations to which more traditional medical practices adhere, but the medical aesthetic field is unique in the medical world in that it is entirely elective and entirely cash-based. People who undergo treatments at medical spas do so because they want to, not because they need to, and those treatments are much less expensive than the ones available from core doctors' surgical practices. Therefore, for a medical spa to succeed, it must have a large number of patients, its employees must master the art of selling, and it must do what it can to get patients to return. In other words, it should be run like a retail outlet rather than a medical office.

When I tell core doctors that I have medical spa clients who generate up to $6 million annually, they tend to be blown away. Many of them cannot wrap their minds around how that is possible. In reality, the expectations they have about the industry and their own perceived knowledge about it is holding them back.

The migration of non-core doctors to the medical aesthetic industry has made a significant impact on the field during the past decade. Their journey to medical aesthetics has been the result of a couple of factors.

Since around 2010, the growing complexity of the insurance industry has made it more difficult for doctors who work in more traditional medical fields—such as emergency room doctors, general practitioners, and family practice clinicians—to earn money. Some of these doctors simply get tired of dealing with insurance companies—they feel they are being nickel-and-dimed for every last thing that they do.

At the same time, the healthcare process has become extremely commoditized. Large companies now dominate the industry, buying up small practices and driving others out of business. For some doctors, this is something of a relief, since they no longer need to deal with banalities, such as billing and human resources. But other doctors would prefer to have independence, and this consolidation makes it very difficult for them to have individual practices.

As a result, these disenfranchised doctors are looking for new ways to make money, and many of them have gravitated toward the medical aesthetic industry. The fact that the industry is cash-based holds tremendous appeal to them, as they do not need to deal with insurance companies to get paid for these elective procedures. Moreover, doctors who work in the medical aesthetic industry are able to operate their own practices and build their own brands. Large healthcare conglomerates have yet to make inroads in the medical aesthetic industry, so it still largely consists of independent doctors and entrepreneurs who own and operate these practices. That can be very attractive to those who feel they have little control over their careers practicing more conventional types of medicine. In fact, it is nearly impossible to have this kind of freedom in other areas of health care.

Since these non-core doctors have begun migrating to the medical aesthetic industry, the economy has improved dramatically, and a huge population of affluent Baby Boomers and Generation Xers who are fighting the aging process has come to rely on the services of medical spas and laser clinics. In addition, social media has made it easier than ever for practices to reach out to prospective customers and demonstrate the value of their services, which has caused the stigma surrounding medical aesthetic services to dissipate to a degree. What's more, the industry still has a great deal of potential for expansion—the total population of people receiving medical aesthetic treatments is not even close to what it's going to be.

As you can imagine, this confluence of trends has caused the medical aesthetic industry to look extremely attractive to non-core doctors, and many of them have made or are making the transition. Since the treatments performed at medical spas are relatively simple and non-invasive, there's no need for these doctors to seek any sort of special board certification to get into the business. Provided they take the time to learn aesthetic procedures and technique, the industry is open to any doctor who wants to get involved in it.

These non-core doctors have not only come into the market, but also taken it over. There are a variety of reasons why. Whereas core doctors often try to run medical spas as a subsection of their surgical and dermatological practices, non-core doctors tend to place their primary focus on their non-invasive aesthetics practices, and they learn about the industry by fully participating in it and committing to it. They are the ones performing the treatments, they are building their brands, they are undergoing business training. In other words, they are learning how to run a medical spa the way it should be run—with focuses on marketing, patient retention, and sales, in addition to the medical side of the business. They know they have to have patients in order to survive, which is a stark difference from the perspective many core doctors have of their medical spas. If a medical spa associated with a surgical practice doesn't make money, it's not a dealbreaker to the practice because the surgical practice is where the real money is (I've heard of several surgeons refer to their medical spas as “loss leaders”). But if a medical spa is your primary focus, you have to learn to adapt quickly. That's why non-core doctors have experienced so much success in the medical aesthetic industry in recent years.

Put another way, core doctors tend to presume that they know the intricacies of the non-surgical medical aesthetic industry because it exists in a space that is roughly adjacent to their fields. Non-core doctors, meanwhile, don't know about the medical aesthetic industry at all and therefore take the time to learn about it. As a result, non-core physicians tend to run their medical spas much more effectively and efficiently than core doctors, and their profit margins tend to be much higher. Of the top 10 medical spas in the country that I know of, none are run by core doctors—they're run by either non-core doctors or entrepreneurs, most of whom partner with non-core doctors as their medical directors.

Non-core doctors are affecting the industry in ways that few could have foreseen. When I give talks to core doctors at conferences such as Vegas Cosmetic Surgery, I tell them that they've fallen behind when it comes to medical spas, and they need to give their medical spas the attention they deserve as separate businesses or else they're going to be pushed out of the industry entirely. Some core doctors are beginning to understand this, and when they implement this philosophy into their medical spas, they'll likely be surprised by how much more money they make.

How to Build an Aesthetic Practice in a Busy Office Setting 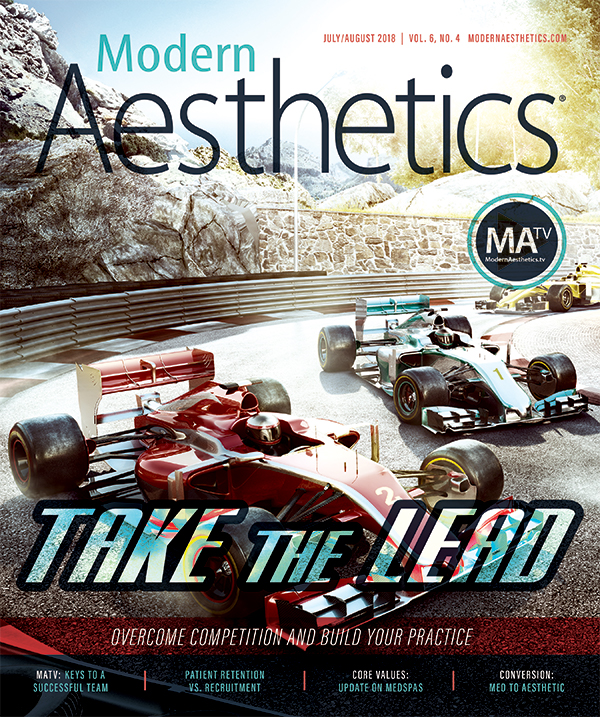