“Dr. Kent, you need to see this. Now!” That's how office staff summoned David E. Kent, MD when his first Emsculpt patients returned for follow-up. Staff simply could not believe the results. And Dr. Kent, a dermatologist in Macon, GA, was similarly astounded. Now research confirms what he, his staff, and his patients observed. For the first time ever, non-invasive technology can build muscle and reduce fat, creating the trim, toned, fit look that patients desire. It's called High Intensity Focused Electromagnetic (HIFEM) Energy.

Beverly Hills plastic surgeon Brian Kinney, MD led some of the clinical research on Emsculpt. “It was intriguing to study something that might have a mechanism that would affect—for the first time in my knowledge, in active clinical practice in aesthetics—both muscle and fat cells,” he says.

Bruce Katz, MD, Director of Juva Skin & Laser Center in New York City also participated in the trials. “This is a very innovative approach,” he asserts. “This is the first time high intensity electromagnetic fields are being used. A lot of devices out there are used for fat melting non-invasively, but this not only offers improvement via fat reduction, but you get toning of the muscles. It's the first time we're using this type of energy source—using any energy—to tone and tighten muscles in addition to taking away fat.”

“High Intensity Focused Electromagnetic Energy affects skeletal muscle, not smooth muscle. It forces what are called supramaximal contractions—contractions that are bigger than what any individual could do on his or her own,” explains Chicago dermatologist Carolyn Jacob, MD. “It actually causes all of the skeletal muscles to simultaneously contract in the area that's being treated.” When energy is applied to the abdomen, the rectus abdominis, the transverse abdominis, and the obliques all contract at the same time. Dr. Jacob points to the example of diastasis recti occurring post-pregnancy. It is impossible once the muscles separate to efficiently target and tighten them via standard exercise. However, delivery of HIFEM with Emsculpt provides improvement even for these muscles.

A range of studies support the clinical benefit of Emsculpt's HIFEM to reduce fat and increase muscle. In fact, a series of five trials have been completed, including studies using traditional pictures and tape measure, studies using ultrasound measurements, studies with CT measurements, and animal studies. “To show that we had fat resorption and decrease in measured circumference of the abdomen, in combination with hypertrophy to the muscle was really, I wouldn't say startling, but very satisfying,” says Dr. Kinney. “Very gratifying.” 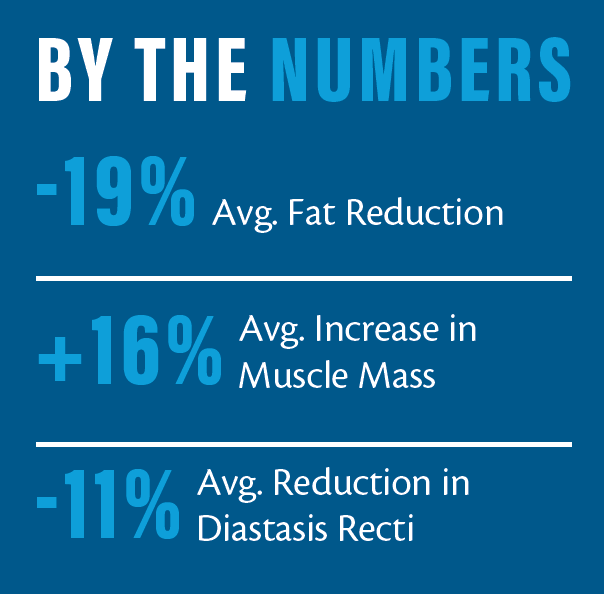 “When we investigators gathered to view the data, we found patients averaged over four centimeters in circumferential reduction, 19 percent reduction in fat, and 16 percent increase in muscle mass,” Dr. Kent says. “This was across the board. All our data points tracked. Remarkable!”

The depth and breadth of the research is notable, says Dr. Katz, an industry research veteran. “We've done ultrasound studies as part of the trials to show that there is reduction in the fat thickness and also thickening of the muscles. So there's toning and tightening of the muscles, too. And we used three-dimensional photography, so we are actually able to not only qualitatively see the improvements, but quantify the improvements and change in volume using 3D photography,” he says. 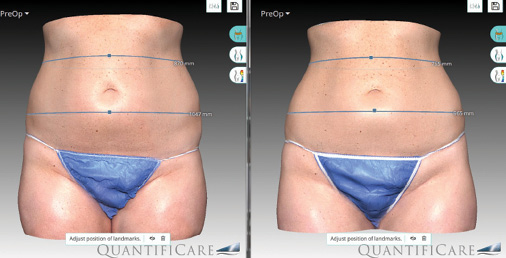 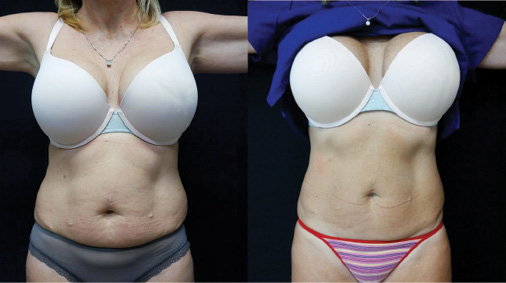 Research continues. Dr. Kent is part of a six-month follow-up study. So far, data show that patients tend to have some degree of continued improvement on the objective imaging measures.

The level of assessment for Emsculpt has raised the bar for future research, Dr. Katz asserts. “That's the new, really objective way to measure benefits when you're doing body contouring studies.”

Dr. Kinney agrees. “If you do the traditional pictures, or even 3D, and you do a tape measure…it's not so precise. But to do five different centers, five different methods of evaluating the results, including the animal studies where we look at lipids in the blood, that's impressive. It's obviously not something we'll be doing on a regular basis with patients in the clinic.”

“It doesn't hurt at all. These supramaximal contractions cause muscle hypertrophy, more muscle fibers, but it also makes the muscle fibers that are there larger,” explains Dr. Jacob. Emsculpt treatment is anatomic-site dependent, she adds. “There's a different way of doing these supramaximal contractions for the buttocks, so that they're not losing the fat as much, because you don't want to lose the fat on your bottom, if you're trying to reshape it. In addition, the adipose tissue in the buttock is metabolically more resilient in nature to the metabolic activities.”

Emsculpt is being studied for other uses. However, Dr. Jacob emphasizes that the available treatment applicators and protocols have been carefully studied for the abdomen and buttocks, respectively, to provide optimal energy delivery. Treatment is contraindicated in patients with any metal prosthetics in the body, though she suspects this could be further refined to specific types of prosthetics.

Physicians experienced in the use of Emsculpt say that treatment is well-tolerated and generally comfortable. Treatment is initiated at about 30-35 percent muscle intensity—patients will feel some muscle activation, almost like a tickling sensation—and titrated to full intensity within about five to 10 minutes. Total treatment time is 30 minutes. Patients undergo two 30-minute treatments per week for two weeks. Clinical study sites are recommending retreatment every three to four months.

“What's incredible is that treatment is done just in four total treatments,” Dr. Jacob says. “It's very little time on the patient's part to have the treatments. That makes it easily acceptable to a lot of people. They fit it in over their lunch hour. There's no downtime or pre/post-care.”

“The best candidates are people who have localized areas of fat that are resistant to diet and exercise—not overweight, but they can't get rid of these fatty deposits with diet and exercise alone,” Dr. Katz shares. “I think we're just beginning to look at a lot of potential applications of this new energy source. I think that's huge potential.”

“This technology was extensively studied and documented prior to launch,” Dr. Kent stresses, “and it's the only technology that focuses on muscle.”

For Dr. Kinney, there are five stand-out features of Emsculpt. “One is it's completely noninvasive. Two it treats muscle which none of the other devices do, does not require local anesthetic, general anesthetic, sedation or anything else. Three is the treatment cycle is two weeks, not two or four months. The next is it does not require puncturing of the skin. And the next is it's the only device on the market that will cause decrease in abdominal fat and hypertrophy of rectus abdominal muscles, in the same treatment.

“This is a new paradigm,” Dr. Kinney adds. “It's the only device that I know of that's been validated five different ways in parallel studies from five different centers ongoing at the same time.”

5. Jacob C., Paskova K. A novel non-invasive technology based on simultaneous induction of changes in adipose and muscle tissues: Safety and efficacy of a high intensity focused electro-magnetic field device used for abdominal body shaping. Presented at the Annual Meeting of The American Society for Laser Medicine and Surgery, 2018 Dallas TX. 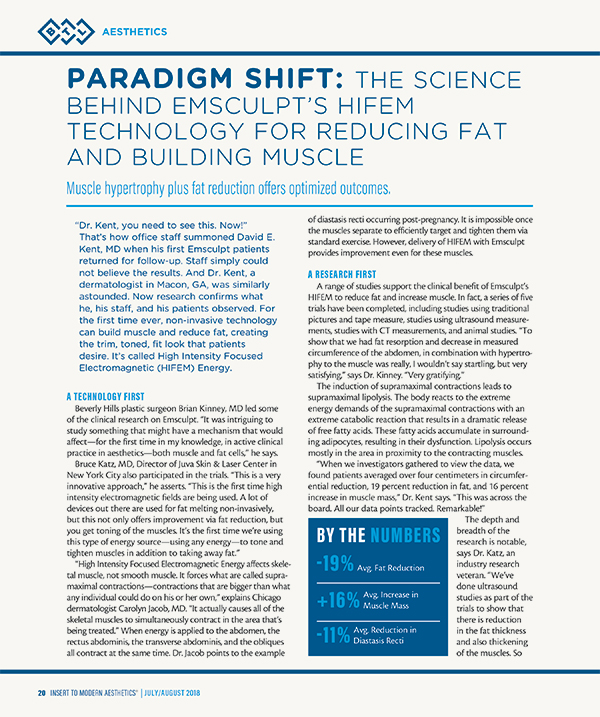