The FDA last month approved Kybella (Kythera), a first-in-class injectable agent indicated for improvement in the appearance of moderate to severe convexity or fullness associated with submental fat in adults. It is administered into the fat under the chin, an area that has proven elusive even as the non-invasive injectable and device landscape has expanded in recent years.

In Phase III studies, 68.2 percent of patients responded to Kybella based on a composite of validated physician and patient measurements. According to Modern Aesthetics® magazine's Co-Chief Medical Editor Heidi Waldorf, MD, the approval of Kybella is credit to both its compelling trial data as well as its novelty in the field. “What's very exciting about Kybella is that it is not only just another tool in our toolbox, but a brand new tool,” says Dr. Waldorf. “It fills a niche and need that we haven't been able to fill in a non-invasive way,” she continues.

According to Practical Dermatology® magzine's Chief Cosmetic Surgery Editor, Joel Schlessinger, MD, submental fat is a rapidly expanding area akin to eye lashes when Latisse came onto the market several years ago for eye lashes. “Whenever you see in a new introduction in an area with significant potential, there is a greater opportunity to spur business and awareness both at the same time,” says Dr. Schlessinger. What makes Kybella stand out even more is that it represents a whole new area, says Dr. Schlessinger. “It will dramatically revolutionize the treatment of chin fat and has potential to bring new patients to aesthetics practices and potentially re-activate old patients, as well.”

In the last 10 to 15 years, advancements in the facial aesthetics arena have emerged at such a rapid pace. But according to Dr. Waldorf, these advancements have left an even greater void in the area of submental fat. “We are able to lift and contour the face with combination of filling agents as well as resurfacing and tightening devices, but despite their ability to improve the jaw definition, none of these modalities have worked for submental fat,” says Dr. Waldorf. During this time, demand for effective treatments for the chin fat area has skyrocketed, according to Dr. Schlessinger. “We did a research trial on patient awareness and desire for chin improvements several years ago, and it was quite obvious that this is an area where there is a great deal of potential,” Dr. Schlessinger notes. Now, with the approval of Kybella, Dr. Waldorf observes, “We will be able to streamline and slim the chin area to make a much more elegant jaw line and neck for both men and women,” says Dr. Waldorf. For men, in particular, Dr. Waldorf notes that Kybella will be particularly well suited. “For men, the upper face may not be as much an issue when it comes to aging. Men can look hollow and not look tired and old. And yet, changes to the lower face and jaw line can have a significant impact,” she says.

In addition to compelling physician reported response, clinical trial data indicated that patients treated with Kybella also reported an improvement in the amount of fat in the area under the chin. Moreover, patients reported improvement in the emotional impact of submental fat when asked how happy, bothered, self-conscious, embarrassed, old and overweight they felt following treatment in relation to the amount of their submental fat.

Dr. Waldorf adds that in addition to these benefits, the procedure itself is relatively undemanding for patients. “In an office setting without any sedation, the patient can go right back to work,” says Dr. Waldorf. Additionally, it's worth noting that depending on how much fat there is to dissolve, multiple treatments may be required, says Dr. Waldorf. Thus, “it's something that can be done gradually, which will be a boon for patients who don't want to other people to know they've ‘had work done'.” Regarding adverse events, “There could be some limited downtime and minor swelling or bruising, but other than that the patient is fully functional,” Dr. Waldorf says. According to clinical trial data, the most common adverse reactions were associated with the injection site and included swelling, bruising, pain, numbness, erythema and formation of small areas of firmness around the treatment area. A majority of these, however, were minor. 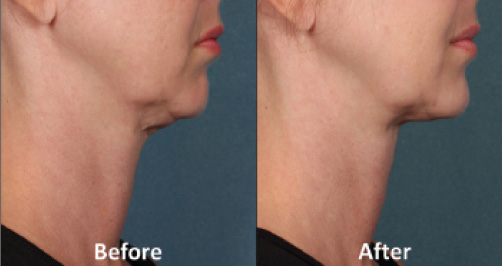 Given the fact that Kybella is a first in class agent, a learning curve is expected, as with any new product, notes Dr. Schlessinger. Moreover, safety is critical. “The most important aspect remains the imperative that this product not be used inappropriately,” says Dr. Schlessinger. While other uses may be explored in the future, Dr. Schlessinger emphasizes the importance of using Kybella on-label. “The data derived from studies indicate that this product is clearly only for the chin area and extrapolating outside this area could lead to serious problems,” says Dr. Schlessinger. “There is great potential for misuse, and with that come errors and complications,” he notes. He recalls the rollout of a product called LipoDissolve in the mid-2000s. “There was quite a bit of misuse with that product, and it fell into untrained hands, including medspas and chiropractic offices, and the results were nearly disastrous not only for patients but for the procedure,” says Dr. Schlessinger. LipoDissolve was subsequently removed from the market.

Dr. Schlessinger emphasizes that Kythera's model has been altogether different, with the company performing voluminous research in effort to understand submental fat and achieve a synthetic version and mechanism for FDA approval. Given previous failures in this realm, Dr. Waldorf believes that messaging will be key for the success of this and other novel products. “It is essential to make sure that patients understand the difference between this FDA approved product and the other mixtures that have been compounded that people have injected as part of mesotherapy, as well as other treatments that have had something of a checkered past,” Dr. Waldorf explains.

For these reasons, Kybella will have a limited release initially to physicians who were investigators and other key opinion leader trainers. Kythera has developed a training program to educate physicians on the safe use of the product. Physician faculty education will begin in June 2015. Then, later this summer, physician training programs will commence, with physicians being able to purchase Kybella treat their patients after they have been trained. “Just as we developed and learned from each other regarding best practices and techniques to improves results and decrease discomfort with toxins and fillers, the same is true here,” says Dr. Waldorf. “We will have to learn how to tailor it to our patients in such a way so that patients get optimal experience and minimized downtime,” Dr. Waldorf notes. Dr. Schlessinger agrees. “It will take some time to achieve an awareness and simply to educate the physicians who need to understand what this process involves,” he observes.

“Kythera is well on its way to doing a great job visualizing a need for this product, as well as facilitating novel and hopefully effective training process and public relations campaign,” says Dr. Schlessinger. “Part of the game-changing aspect of this approval is that the company has taken this product from its inception to FDA approval, and that alone is a significant achievement. Not many companies have the wherewithal to go the distance,” he says.

The American Society for Aesthetic Plastic Surgery (ASAPS) elected new officials for the 2015/2016 term during The Aesthetic Meeting in Montreal, PQ, Canada, in May. Birmingham ABPS board-certified plastic surgeon, James C. Grotting, MD, is the new President of the Aesthetic Society.

Dr. Grotting is clinical professor of plastic surgery at the University of Alabama at Birmingham and adjunct clinical professor at the University of Wisconsin-Madison. He is also in private practice in Birmingham. Dr. Grotting is a director and oral examiner for the American Board of Plastic Surgery. He is the author or editor of five plastic surgery textbooks and lectures internationally. He is a past president of the Southeastern Society of Plastic Surgeons. Dr. Grotting's tenure as President will revolve around expanding aesthetic fellowships available to plastic surgery residents, improving aesthetic education for members and within ASAPS' educational offerings, improving relationships within the national and global plastic surgery community, and continuing to emphasize the importance of patient safety.

Other new Executive Committee officers are: 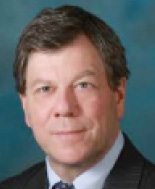 “The use of the American Sports Bra Post-Surgical Bra has totally changed my plastic surgery practice… The compression helps to resolve swelling and allows the patient to feel supported and secure in the initial healing phase.”

According to survey results from the American Society for Dermatologic Surgery (ASDS), dermatologic surgeons performed nearly 9.5 million medically necessary and cosmetic procedures in 2014.  Data were collected for the 2014 experience and generalized to represent all ASDS members. The survey was conducted Jan. 2 to Feb. 6, 2015, for data reported in 2014. Survey results are reported based on 826 physicians (a 21 percent response rate). 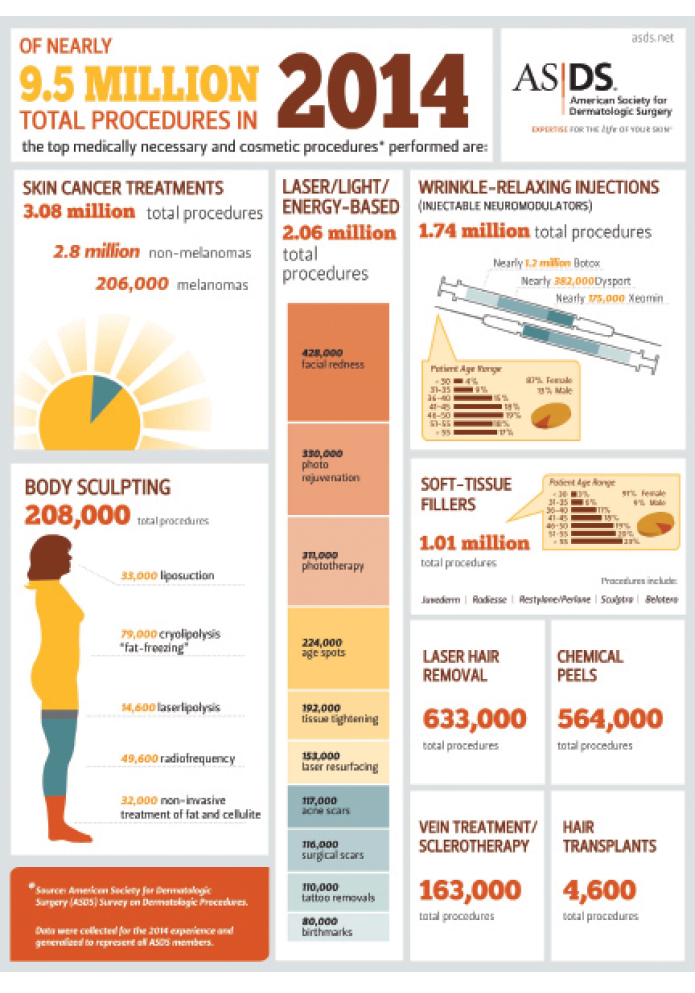 Radiesse® from Merz Aesthetics received FDA approval for hand augmentation to correct volume loss in the dorsum of the hands. Radiesse® provides an immediate volumizing effect and can help to reduce the prominence of tendons and veins in the hands, delivering smooth, natural-looking results that can last up to one year.

In a randomized, controlled US trial, blinded evaluators reported that Radiesse® improved the appearance of both hands in 75 percent of treated patients at three months. Also, 98 percent of treated patients also reported improvement in the appearance of their hands at three months. Improved aesthetic outcomes as measured on the Global Aesthetic Improvement Scale (GAIS) after initial and repeat treatments correlating with clinical improvement were demonstrated in this study, with all primary and secondary endpoints being met. Most adverse events were injection site reactions such as swelling, redness, pain and bruising, which were usually mild to moderate, short in duration (lasting about 1 week), and required no treatment. No severe device-related adverse events were reported that required treatment.

Galderma launched ASPIRE Galderma Rewards, a new loyalty program for its aesthetic brands. The program serves both both US healthcare professionals and consumers in one integrated program. ASPIRE rewards its members with significant savings across the entire aesthetic product line and provides special resources and support to better connect healthcare providers and patients. 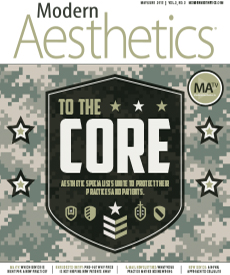