A Fab Approach to Facelifts

A look at a non-surgical combination approach to successfully treat the aging face for enhanced patient satisfaction.

A Q&A With David Alessi, MD

The FAB Facelift, developed by Dr. Alessi, uses a combination of non-surgical enhancements to create the type of results that are more typically seen with a traditional, surgical facelift. The FAB Facelift procedure includes Fat or Fillers, Ablative laser resurfacing, and then treatment with Biologics, such Botox, platelet-rich plasma (PRP), and stem cells. Ahead, Dr. Alessi describes the procedure and its benefits to patients.

What is the FAB Facelift?

The procedure was designed to treat the classic aging process—as we age, we sag, we develop fine lines and sun damage, and then we lose volume, explained Dr. Alessi. “If you just do any one of these modalities alone, all of which have been around, then you are not really addressing the other issues,” he added. The idea of the FAB Facelift procedure is to address all of these aging issues in one sitting. The procedure, Dr. Alessi noted, is modifiable depending on the patient's desires—for example, if a patient wants to do a filler that will go away after some time, or if the patient wants to use fat, which could be more permanent.

When one loses volume, especially in the malar area, the fatty area that used to be there descends into the area of the nasolabial fold and gives the heavy appearance of the nasolabial fold right above the actual crease itself. While you can't really pull that fold up, you can augment the malar area and replace where the fat had come from, Dr. Alessi said. Also, he explained, when a patient has a hollowness beneath their eyes in the tear trough sulcus, injecting fillers there will help to decrease the hollowness. This can be a primary treatment, or for patients who may have had blepharoplasty in the past and had too much fat removed, it can correct that issue.

“Combining modalities allows us to not make the mistake of overfilling...Imagine a crinkle balloon, and if we put enough air into that crinkle balloon you get rid of all the crinkles,” Dr. Alessi said, explaining the approach some physicians take that leads to overfilling. What these physician do is inject five, six, or even seven syringes of fillers into a patient's face, which results in the patient's face being so ballooned out that indeed there is a reduction in wrinkles, but it looks unnatural. “They have these big, stuffed faces and I just don't have any idea why people think that looks good,” he added. “And when we see celebrities like that we just laugh at them.”

The idea is to use a judicious amount of fat to replace some of the loss of volume to try to get some suspension, and then you can get some more tightening and a “wow” factor with treatment with a fractionated CO2 laser. Because of the tremendous advances in fractionated CO2 lasers recently, including faster healing time, Dr. Alessi said he considers it the gold standard and what he primarily uses in his practice. And with the use of biologics, such as PRP, at the same time, patients heal quicker with less downtime; it is just a much better option than some of the other lasers, he noted.

“For the biologics, Botox obviously has been around for a long time, and everybody is getting more and more ingenious with Botox. We obviously use it the glabella, in the forehead, and around periorbital rytides,” Dr. Alessi explained. “But then other places that we'll use it—at least a little tiny bit—is just underneath the pupil in the lower lid because it gives a nice rounded appearance to the lid. And then another place we'll use it is a little bit in the lip depressors—basically just under the corners of your mouth. We can put a little bit of Botox there and one of the labial depressors and create not a permanent smile, but basically get rid of the fish mouth patients get as they get older.”

While PRP and stem cells are controversial, Dr. Alessi said he is convinced that PRP with laser provides faster healing. We have quite a bit of experience with PRP and micro-needling, he explains, and patients definitely have a great glow to their skin after treatment, and the main testimony is that patients keep coming back over and over again because they love it. There is a need for more clinical studies to evaluate PRP, he said.

“With stem cells, we can enrich the fat that we obtain by taking the stem cell enriched portion of the fat, which appears to be beneficial. When we first started injecting fat and took fat out and injected it right back in, patients were typically told there was a 50 or 40 percent chance of a 40 percent take, and now it's closer to a 70 percent chance of a 70 percent take, or even higher,” Dr. Alessi said. This improvement can be attributed to several factors—from washing the fat better, taking fat that is stem cell enriched, and also mixing with PRP. All these things together are helping the fat to last longer. Again, it hasn't been studied long enough to know exactly what is causing the improvement—whether it's the stem cell enriched fat that is doing the job or if it's the PRP that's helping it along. “We are really not quite sure,” said Dr. Alessi. “But definitely, over the past several years, our success rate for (injecting) fat is higher. That's why it comes back to the FAB facelift—you fill to restore volume, but don't overstuff somebody, you have to do the ablative laser to make fine lines and sun damage go away and get some tightening with that, and you have to use appropriate use of biologics, which is the Botox, which has been around for awhile, and then the PRP and stem cells, which are newer, not as well studied, but are definitely doing something.”

It's nicer for the patients if everything is done in one sitting, explained Dr. Alessi. Patients are given oral sedation followed by some local anesthesia around the face to make it more comfortable for them. The procedure is typically done in FAB order (fillers, ablative laser resurfacing, then biologics). “We were more concerned with doing the laser on top of fillers before, but now if you inject fillers fairly deeply; the laser has it at the most 100 nanometers of penetration. So it's really not going to get anywhere that the fat is, especially if it's placed deeper. So if you are, if you do the new fillers, such as Voluma, which is deeper placement of filler, you are not going to have any issue with the filler whatsoever. The things you would worry about with the superficial filler is that if it's too superficial then you are going to possibly decrease some of the vascular supply to the dermis and then if you are lasing on top of that, you may have healing issues and scarring and things like that,” he said. “We haven't seen anything like that, because we're facial plastic surgeons, we know the anatomy very well, we know where the muscles are and how to get the fat into the muscles, and really into the deeper subcutaneous tissues and so it's actually designed to do it all in one fell swoop. Although, we'll obviously do whatever the patient wants to do, and if the patient wants to break it up, then we'll break it up.”

Are you using this technique to delay surgery for patients or is it truly for some patients an alternative to surgery?

“It's a little bit of both,” said Dr. Alessi, explaining that he takes a very pragmatic approach and never judges a patient. He offers his patients an anti-aging consult and presents a smorgasbord of choices that will benefit them best. If a patient in their 60s presents with a “turkey waddle” or something like that, the FAB facelift may be offered as an option for a treatment that can help them look younger, but the patient should be told it won't take care of the turkey neck, and they may need Dr. Alessi's trademark U-lift or a full facial lift. “We present the smorgasbord to them and attach the prices, too,” he explained. “Consumers today like when they have a choice and they can take over some of their care. Some patients just want me to do whatever the right thing is for them and then I will do whatever it is. If they are 40 years old, and they have a wee little bit of sagging but hardly much at all and it's mainly a little bit of volume shift, I'll do everything I can to dissuade them from getting a neck lift or anything like that. It's partly chosen for what the patient needs, partly chosen for what the patient's desires are, and what their pocket book is.”

Improving The Patient Experience And Outcomes With Aesthetic Injectables: A New Strategy

A Q&A With Steve Yoelin, MD

Optimize Skincare Dispensing In Your Practice 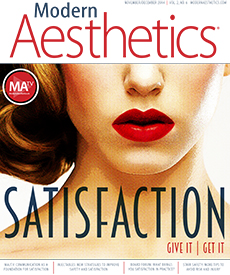