David Shaffer is Vice President of Professional Medical Insurance Services. PMIS specializes in providing insurance to medical spas and serves as the exclusive insurance carrier for the American Med Spa Association (AmSpa). For more information contact David Shaffer at (260) 637-9879 or send an email to dshaffer@pmis.com.

As the aesthetics industry continues to grow, so does the demand for Medical Directors. In the last edition, Renee E. Coover, JD, covered important considerations for would-be Med Spa directors (read the article online at ModernAesthetics.com). In follow-up to that article, ahead I will present some of the insurance ramifications of becoming a Medical Director.

In many instances, physicians assuming these roles are not dermatologists or plastic surgeons. You may ask yourself, “Is this really a problem considering, in many cases, a Medical Director's duties are only administrative in nature?” Most would consider a Medical Director's responsibilities to include items such as reviewing and signing off on patient charts, updating policies, procedures and/or consent forms, delegation of services, etc. Further, most would also agree that these responsibilities can typically be accomplished by working a limited amount of time at a given practice.

On the surface this seems like an easy way for a physician to capture some additional income without dedicating much time or energy. However, examining this subject in a little more depth, the inherent risks become apparent. In last month's article, there was also a cautionary tale about a physician needing to be competent in the services delegated. What would happen if a claim arose and the physician's competence was challenged? How would an insurer respond? Many medical professional liability policies contain wording stating coverage will be excluded if state laws were violated. Knowing this, the real question becomes, “How would an insurer determine if a physician held the necessary competency to delegate a specific service?”

To help answer this question a couple of the medical spa industry's malpractice insurance providers were approached with this very question. It quickly became clear that this is an ambiguous topic at best. Essentially these insurers stated that they would have a difficult time determining if a physician was or was not appropriately educated/trained in the services being delegated.

One may argue that certificates of completion for a particular aesthetic treatment had been or could be obtained justifying competency. While that may be a starting point, the insurers held fast, saying that there is still no way for them to determine that a certificate course provided the physician with adequate qualifications to perform and/or delegate a treatment. Because of this, the insurers indicated they could only rely upon what a governing body mandates. In this case, they fall back upon licensing bodies.

Thus far, most physician licensing bodies have yet to stipulate the competencies necessary to be experienced/qualified in aesthetics. Because training is so subjective, it would be difficult for an insurer to prove otherwise. Assuming a state board/organization did define the requirements necessary to perform a particular aesthetic treatment, the insurers would have a solid reference point to base their underwriting decisions upon. Should a claim occur and a violation be noted, a physician's license and/ or insurance coverage could be impacted.

It should be noted that the vast majority of the policies being written for medical spas today contain no specific policy language (other than licensure) that would prevent coverage from applying to a delegated service. Essentially the insurers' goals are to underwrite this exposure prior to issuing a policy. However, unless a physician is actually performing treatments (which would require a full underwriting submission), this becomes a near pointless task.

There are other risks, as well. Physicians must remember that even though treatment activities at a Medical Spa are often limited in scope, they still constitute the practice of medicine. Treatments delegated (directly or indirectly) to an Aesthetician, Registered Nurse, Laser Technician, etc. ultimately remain the physician's responsibility since the delegated individuals cannot operate a medical practice or have their own patients. Therefore, if a claim was to arise or an investigation commence, it is the physician's license and future insurability that could be jeopardized. The main exception would be if a state permits the Corporate Practice of Medicine by which non-physicians can own, operate, and hire healthcare professionals.

Another area that is often overlooked is the term “administrative duties.” It has been seen how a significantly different view exists between a Medical Director's understanding of administrative duties and the views of the insurers actually providing coverage. What gets lost is that a simple act like performing a patient consultation (pre- or post-care) or conferring on a patient's treatment protocol with a delegated provider is no longer administrative in nature. At this point a patient relationship is created. When this occurs, the Medical Director's actions go well beyond what most insurers intend to cover. Should a claim against the medical spa, treatment provider and the Medical Director develop, the coverage provided to the Medical Director could be denied if a consultation with the patient occurred. To be adequately insured, a physician would need to confirm coverage is in place for any incidental contact he/she would have with the medical spa's patients. Assuming coverage is not provided via the medical spa's policy, the insurer would need to amend the policy so that it did include direct patient care to the physician. Alternatively, the Medical Director would need to rely upon his/her own individual malpractice policy to extend this type of coverage.

This brings up another point. Often medical spas will state that their Medical Director's individual malpractice policy extends to the facility and its staff. In certain instances this could very well be the case. This occurs most often when the medical spa is being operated in conjunction with the physician's private practice and when the physician is on-site on a regular/routine basis. When this is not as successful is when a medical spa is operating on a standalone basis with little intervention from the physician (i.e., when the practice is essentially being operated by NPs, PAs, RNs, LE, etc.).

Before arbitrarily assuming a Medical Director's current policy extends to the medical spa, a call should be placed to the physician's insurer fully disclosing the facility's operations. It is highly recommended that confirmation of coverage be provided in writing so it can be referenced in the event of a claim. Medical Directors who currently have or are considering adding a medical spa to an individual insurance policy should be aware that any claims brought or alleged against the facility and staff will show on your individual claims history reports. Depending on the severity and/or frequency of claims, pricing and/or overall insurability could become an issue.

Without a doubt there are risks assumed by being a Medical Director. It is also true that a physician may never be able to completely avoid the exposure to his/her license, insurance, potential claims, etc. while working as a Medical Director. However, by identifying the risks and taking the steps necessary to protect yourself, Medical Directorship could be a welcomed, enjoyable and potentially lucrative addition to your practice.

Legal Implications Regarding Social Media In The Modern Workplace 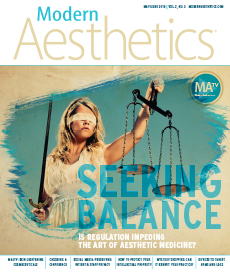