“NEOTENSIL” FOR UNDER EYE BAGS This is a new product from Living Proof, which has partnered with Valeant Pharmaceuticals to treat puffy lower eyelids. It is essentially a film that is placed on the lower eyelid area that compresses the lower eyelid fat compartments and provides some skin hydration. It can be worn for up to 24 hours, and results become evident after one to three hours. The film can be applied daily or just for special occasions. Neotensil has a shaping base that combines with an activating layer to create the supporting film. The film appears virtually invisible. This appears to be a safe, easy, non-invasive method to decrease the appearance of lower eyelid bags. It may even have some application as an early post-operative lower blepharoplasty dressing.

GORE-TEX SOFT TISSUE IMPLANTSGore-Tex (e-PTFE) strips, or soft tubes, have been used for augmentation of the lips, nasolabial folds, and even the glabellar lines. In these areas, the implants are usually placed in the subdermal plane and tissue grows into the Gore-Tex. This holds the implant in place but also minimizes stretch of the implant with facial movement. For this reason, strips are often used in the lip, or even cutting the tubes into smaller sections. Besides some movement limitations, these implants are often palpable under the skin. This is especially true in the glabella and nasolabial fold. They can also be exceedingly difficult to remove.

With the advent of a variety of fillers and resurgence in fat grafting, Gore-tex facial strips and tubes will continue to decline in use. 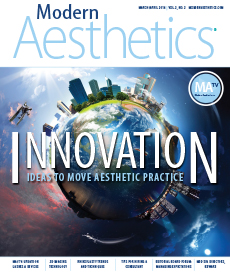