With demand for body contouring hitting a critical mass among men, aesthetic experts weigh in on multiple devices for fat reduction.

With the growing demand for fat reduction treatments in her medical/aesthetic dermatology practice, Grace Liu, MD settled on the Vanquish from BTL as an alternative to the two CoolSculpting (Zeltiq) machines in the practice. “Vanquish fits certain patients' bodies better,” Dr. Liu says.

Dr. Liu notes that the device is especially useful to target the lovehandles and back for men. Most men require five treatments with Vanquish, and the treatments are provided twice per week over 2.5 weeks. There is no downtime, and patients often see results following each treatment; full results are evident after a few weeks. (See images below of a man treated with Vanquish). Patients lose anywhere from one to five inches with a series of treatments, Dr. Liu says. “While most of my patients overall are women, men account for about 50 percent of the body contouring demand in her practice.”

The male demand for body contouring grew organically, Dr. Liu says. “We have not done external marketing specifically to men, and our internal marketing has not consciously focused on men. We play video loops from the device manufacturers in the office, and these do feature both male and female patients, so I think that helps.”

There are a few considerations to achieve optimal results with Vanquish, Dr. Liu says. Patients need to be well hydrated and should drink a gallon of water the day before and the day after treatment. Instruct patients to avoid diet pills. Dr. Liu advises, since these often contain diuretics, like caffeine or guarana.

Dr. Liu says there are benefits to having different devices in the practice, as she can target her approach to the patient's aesthetic desires, as well as their time availability. And while she's not seeing dramatic increases in overall aesthetic services for men, “There are some patients who may never have been interested in cosmetic procedures who do a fat treatment and then want to do some treatment for the face.”

At his preventive medicine practice, James Howton, DO sees healthy-minded patients, many of whom want to look their best. For some of his male patients, diet and exercise alone aren't enough to reduce fat pockets, so Dr. Howton has integrated several body contouring devices, including the VelaShape III (Syneron/Candela) device.

With its two modes of action—infrared and radiofrequency— VelaShape III is especially suited to the more fibrous fat that men seem to have compared to women. “Men have more collagen component to their fat pockets,” Dr. Howton says. “The radiofrequency energy helps remodel collagen and ‘soften' it so that it becomes easier to target.”

Dr. Howton says, “It's nice to have multiple devices, and to be able to offer combination treatments.” He will even use VelaShape in conjunction with CoolSculpting on the same day. He adds that he is on the waiting list for Syneron's UltraShape, which uses ultrasound technology to target unwanted fat. The different mechanism may further expand the possibilities of treatment, Dr. Howton says.

More men are presenting to his office for fat reduction treatments, but Dr. Howton says he has not actively been marketing these services to men. Sometimes existing patients decide to pursue fat treatments. In other cases, spouses or significant others direct their male mates to the practice.

James Howton, DO is founder and director of Restore Health Center in Loveland, CO. His practice focuses on Preventive, Restorative, Anti-Aging and Functional Medicine.

The founder of FreezetheFat.com, Grant Stevens, MD has seven CoolSculpting (Zeltiq) devices in his office and is the nation's leading provider of the treatment. Today, men officially constitute the majority of his CoolSculpting patients. “For Q1 and Q2 of 2014, men have now eclipsed the female audience,” Dr. Stevens says. They represent 51 percent of the demand for CoolSculpting.

Men like the procedure because it provides results with no downtime and no pain. “Men hate pain,” Dr. Stevens says. Treatment of the belly, love handles, and chest, are all popular, he says.

Dr. Stevens has 11 fat-targeted technologies in his practice, and while some have specific benefits, by and large CoolSculpting is his preferred treatment.

For best results, many patients undergo more than one CoolSculpting treatment using multiple cycles at one setting. If pockets of fat remain, patients can return for another cycle. The process, developed by Dr. Stevens, is called “Treatment to Transformation.” Patients can also be treated with multiple units at one time to target different anatomical locations.

CoolSculpting treatments take one to two hours depending on the number of sites treated, which offers an opportunity to educate patients—especially men—about aesthetic treatment options (See sidebar, next page).

Grant Stevens, MD, Professor of Surgery at University of Southern California and Chairman of the Aesthetic Surgery Division, is Director of Marina Plastic Surgery and Founder of Marina Man Land.

“A cross between a sports bar and a cigar lounge,” Dr. Grant Stevens' new Marina Man Land is an aesthetic medicine facility “geared to the needs and wants of men.”

“The restroom is called the men's room. And in the men's room there is a urinal. On every single wall there's a flat screen TV,” says Dr. Stevens, who was in large part inspired by the success of CoolSculpting to target the male aesthetic patient.

“It's man friendly, but it's not female unfriendly,” Dr. Stevens says of the new facility. “Any wife or girlfriend can come in and feel comfortable.”

While male demand for aesthetic procedures has been fairly consistent for many years—hovering around 10 percent—Dr. Stevens says the recent growth in demand results from a confluence of events:

1. The great recession left many men job insecure and feeling that they weren't competitive for new positions. “Men feel they wear their resume on their face,” Dr. Stevens suggests.
2. Reality TV has made men more aware of what's available—at least to some extent.
3. Men on the dating scene want to look good at any age. This is especially true of older men who may be back to dating following a death or divorce.

In his practice, Dr. Stevens says that non-invasive fat reduction has been the driver of demand among men. Describing CoolSculpting as “the gateway drug,” he explains that men who present for the no-downtime, painless procedure are committing to at least one one-to-two hour treatment session. During that time, they are exposed to education from office staff as well as televisions throughout the practice.

“Men have generally been either uninformed or misinformed about cosmetic services,” Dr. Stevens states. “As they become more informed they realize that this might be something they want to avail themselves to.”

Recognizing the growth in his male patient base, Dr. Stevens was inspired to create a facility that caters directly to these individuals. Every aspect of the planning, from the hardwood floors and wall paneling, the flat screen TVs on every wall, and even the proprietary scent being piped in, has the male patient in mind.

Services are also packaged in man-friendly ways. In addition to education during CoolSculpting treatments, men can also undergo other procedures, such as facial injections. Patients who present for hair removal or hair transplant services can also stack treatments for optimal use of their time.

In a practice that focuses on technology and energy-assisted body contouring procedures, Christopher T. Chia, MD has found increasing demand overall in the last decade, since the introduction of laser-assisted liposuction (Smartlipo, Cynosure). “Patients are very well-informed about the devices in general, with the Internet, and they come into consultations asking for specific technologies often,” he says.

“We have a large proportion of male patients seeking body contouring and this trend appears to be growing for the following reasons: cultural acceptance of cosmetic surgery in general, large metropolitan population, increased awareness of marketed procedures, and faster recovery (especially when performed under local anesthesia).”

The practice markets to drive demand for its services, using demographic-specific marketing for male patients through various media outlets.

Dr. Chia tends to favor technologies that emulsify fat when treating male patients, and says that multiple technologies can be used for optimal results. “Gynecomastia responds well to energy to assist in accurate chest contouring, in my opinion. Fewer and smaller incisions are typically used these days, as well, compared to just a few years ago,” he says.

“Being aware of male-specific body aesthetics is important because men may want a somewhat different look than a woman,” Dr. Chia notes. “In general, men desire a more sculpted and defined look, i.e., more aggressive. Again, we use energy in almost all aspects of body contouring, especially in men.”

Christopher T. Chia is Surgical Director of Park Avenue Smart Lipo™, a certified SmartLipo training facility in New York City. He is the Section Editor for the Emerging Technologies for the Aesthetic Plastic Surgery Journal.

Getting To Know the Male Aesthetic Patient 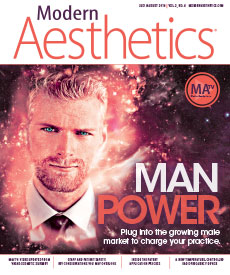